From A Theme Park To A Central Coast Brewery, These 15 California Venues Let You Exchange Vows In A Setting As Unique As You Are 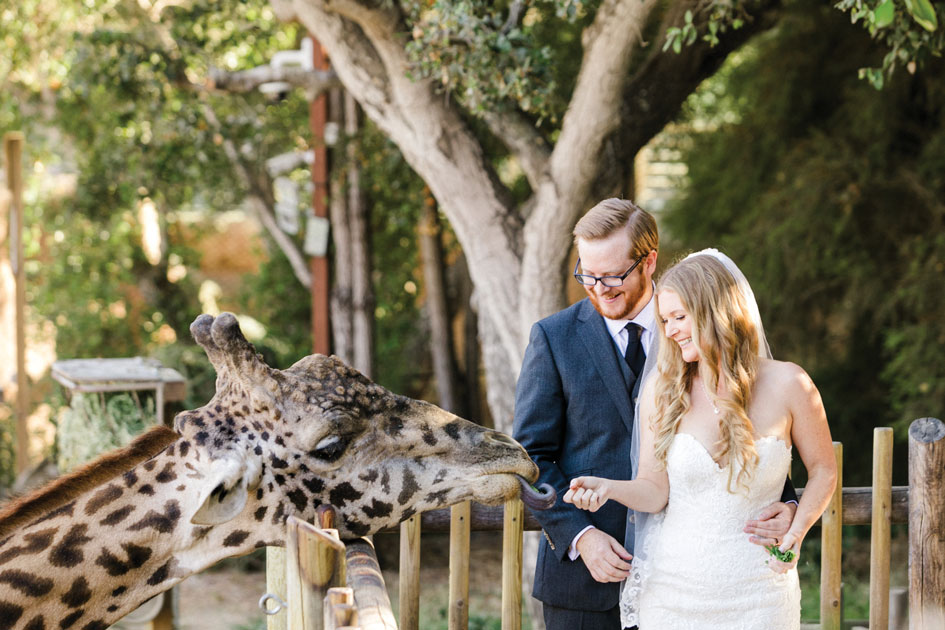 Bored by ballrooms, feeling as if wineries are tapped out or gardens are for the birds literally and figuratively? Luckily, this dilemma is easily remedied, as unique venues, such as a former Boy Scout camp and goat farm, are as common in the Golden State as avocado toast at brunch. 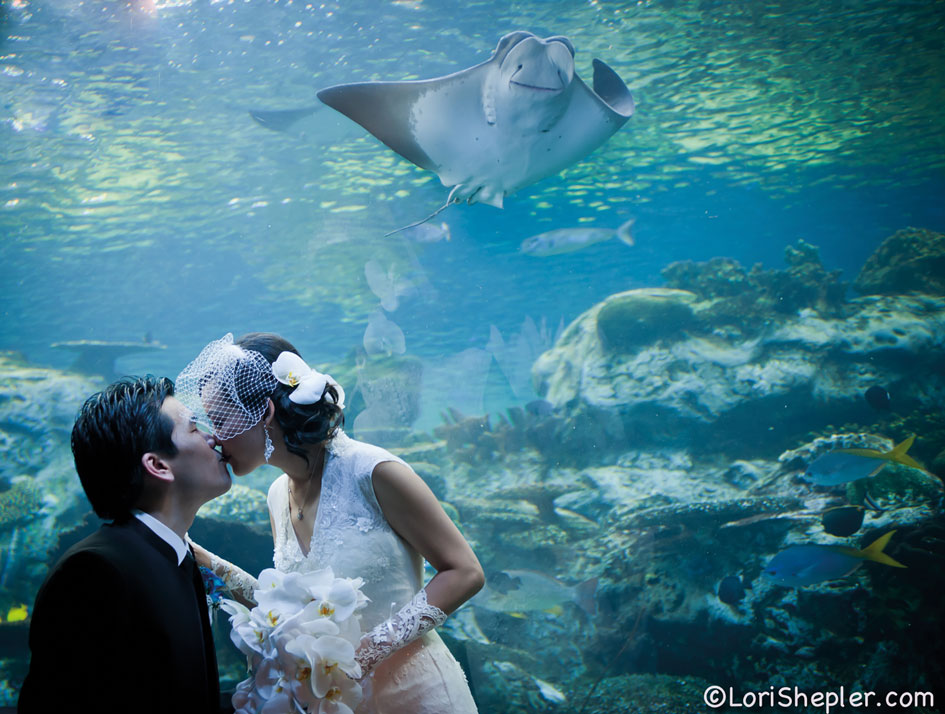 Animal Attractions
Because everything is better when you add a penguin, consider hosting your event at the Santa Barbara Zoo, where ceremonies are usually held after hours in a small grove of palms, followed by receptions on the hilltop lawn, which can accommodate up to 2,500 guests (though typically hosts weddings for 200). Bringing fur and feathers to the party is easy with package enhancements, such as having a scarlet macaw or a hawk greet guests at the front entrance, setting up a snake social or a “flamingle” with the exotic pink birds for the cocktail hour, or arranging for an hour of hand-feeding giraffes. Young invitees can be entertained with train rides and a climbing wall.

Bleating hearts should head to Harley Farms, a family-run goat dairy in Pescadero. This magical place, along with the almost all-inclusive wedding packages it offers, is a boho fever dream of creekside secret garden ceremonies, freshly made lavender lemonade and goat cheese, drippy candles, pewter serving ware, property-plucked floral arrangements and bouquets, twinkle lights, bench seating, farm-to-table meals served in a hayloft or 130-year-old barn, bonfires and a cheesecake for cutting. Alcohol is BYO, but there’s no corkage fee for wines. For an extra cost, the farm will package its products, such as chocolate truffles, honey or goat-milk soaps, as favors. And don’t forget, a spring date means the new kids on the block can gambol into the photos.

Bet on love by having your big day at the races. Santa Anita Park, Arcadia’s historic horse racing venue, is still as much an Art Deco delight as it was when it opened in 1934, especially the Chandelier Room, with its original lighting, baby grand piano, elegant staircases and velvet-furniture-appointed ladies’ room. The jewel-toned speakeasy, hidden behind a faux tack room, is a great staging area. Take a carriage to the infield for a ceremony in full view of the San Gabriel Mountains. There’s no shortage of Instagram-worthy vignettes, which could feature the original checkered floor and startinggate, Seabiscuit statue, walking ring or paddock gardens. You can even arrange for a joke-telling bugler as entertainment or even a pony. Big hats not included.

Take the plunge under the water at Aquarium of the Pacific, where 11,000 ocean animals join the festivities. Do dinner and a diver show in front of the three-story Blue Cavern exhibit. Or ask the best penguin, sea lion or otter to greet guests and hold a hashtag sign. Mingle outside at Shark Lagoon or mambo under the whale models in the Great Hall. Yes, you can still serve surf and turf—and you can feel good about it as the catering team only uses sustainable seafood and emphasizes local sourcing.

Sudsy Soiree
Guarantee a good time by booking at SLO Brew’s venue The Rock, home to the 30-barrel brewhouse and canning line of the 30-year-old award-winning Central Coast brewery. The Rock also features a top-notch restaurant (its bacon-on-a-stick is a must for appetizer hour!), beer garden, and the massive boulder that serves as its namesakes and ceremony backdrop. Finished in rustic barnwood, The Rock’s brand-new 3,500 square feet event center seats 200 and is perfect for larger gatherings and celebrations. Incorporate brewery tours, growler vases, life-size beer pong and giant Jenga. SLO Brew Lofts, a fantastic place in downtown San Luis Obispo to use as wedding headquarters and to get ready, can sleep 32 people across five hip suites, which feature exposed brick, kitchens and record players. One even has a rooftop that’s perfect for intimate pre-wedding gatherings. 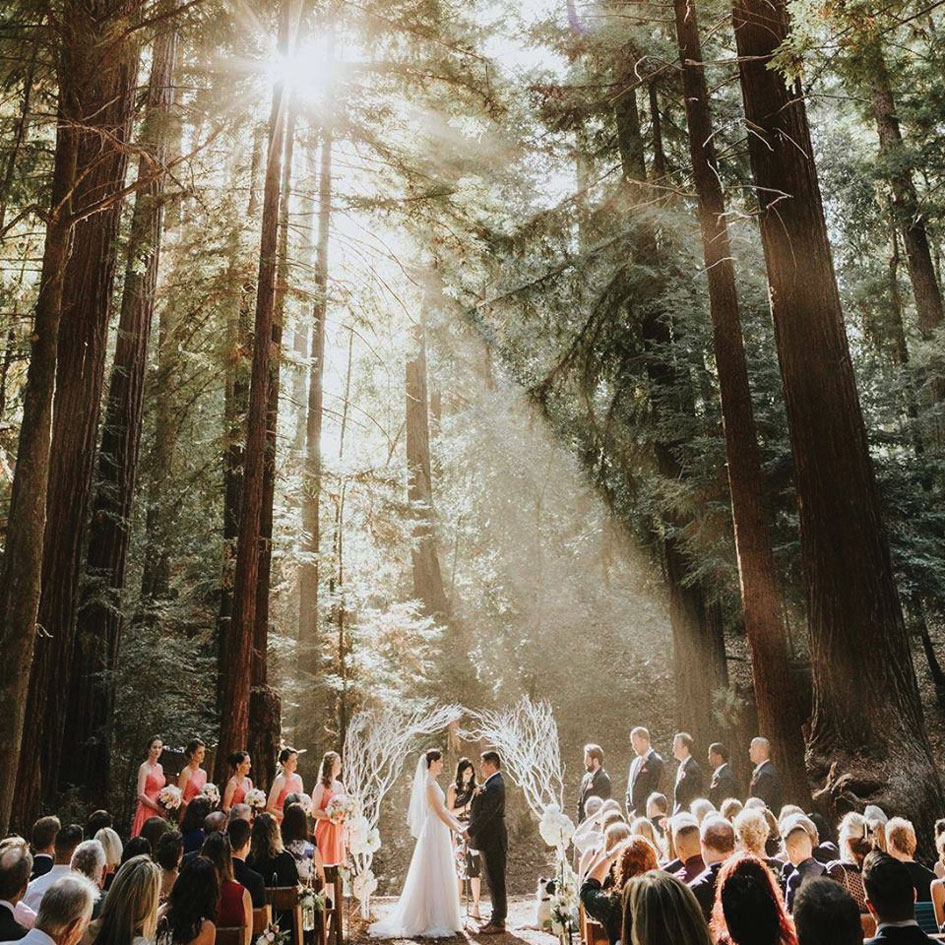 The Great Outdoors
Camp Navarro, a 200-acre camp outside Boonville that has hosted lumberjacks, soldiers during World War II and Boy Scout troops since its inception in the early 1900s, now welcomes sweethearts who appreciate its bucolic splendor. Invite as many as 400 of your closest friends for a wedding weekend full of nostalgia, fireside s’mores, archery, hammocks, swimming holes, tug-of-war, rope swings, sack races and idyllic “I dos” under towering redwoods. Thankfully, the food will be better than that served at your childhood sleepaway, and many of the on-site bunking options, which include rustic cabins, tepees and glamping tents, provide real beds and flushing toilets. Live music can go late into the night, given the isolated location, and staying in your own RV or tent is fine, too.

Let your love bloom at The Flower Fields at Carlsbad Ranch. Peak season is from March through May, when the ranunculus blooms are out in force. The petals provide the prettiest backdrop for the Mediterranean garden as well as the white-trellised wedding stage, with its dramatic up lighting and stone water feature. Although traipsing around the rows of flowers is not permitted, there are designated paths and picture spots, allowing your photographer to create that “among the blossoms” look.  For the reception, the newly renovated barn provides seating for up to 200 guests.

Ghosts and Fairytales
Things might go bump in the night during your gathering at the Winchester Mystery House, but paranormal party crashers would thrill any pair who plan their nuptials at San Jose’s 160-room architectural oddity. Picture staircases to nowhere, doors that open into walls, windows in floors and a recurring spider web motif, all built by rifle-fortune heir Sarah Winchester, who felt the only way to outrun the tortured souls killed by her family’s guns was to continuously add on to her Queen Anne–style Victorian mansion and hold séances. As many as 300 guests can join you for the ceremony and reception in the front gardens, carriage house, greenhouse or the recently renovated dining room. A new bridal suite and prearranged photo spots are available inside the home.

Happily ever after begins at Children’s Fairyland, the oldest storybook theme park in the U.S. The 10-acre Oakland amusement park is said to have inspired Walt Disney, who visited shortly after it opened in 1950. Get hitched on the stage of Aesop’s Playhouse, which has canopied seating for 220, or near an attraction based on your favorite fairy tale. Whimsical photo backdrops include dragons, pirate ships, human-swallowing whales, a Wonderland maze, the Jolly Trolley and carnival rides. Costumes are encouraged as is attaching the seating assignments to the magic keys that open the talking storybook boxes. 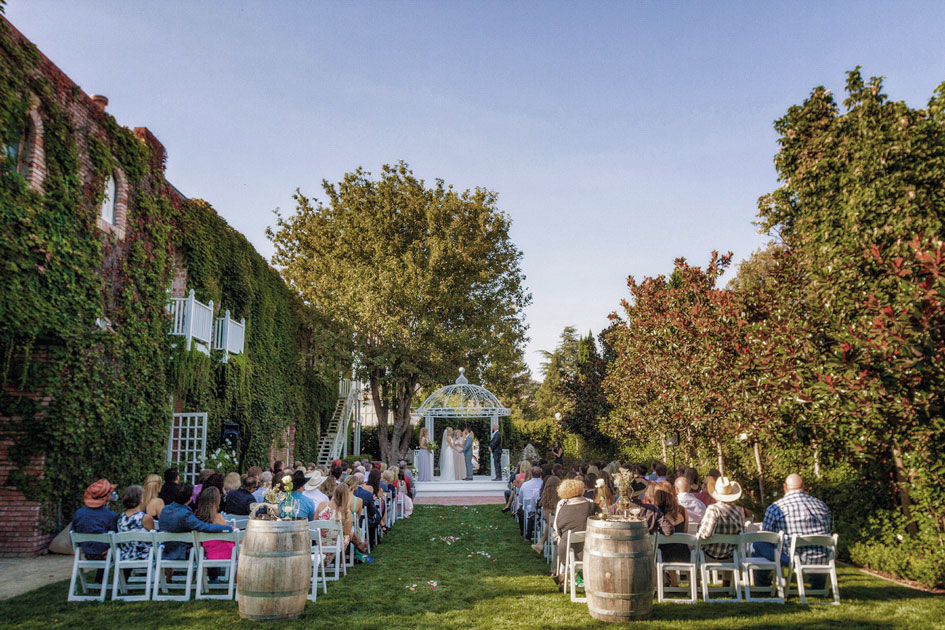 Killingsworth Photography
Wild West
Travel back in time in Los Alamos at the 1880 Union Hotel, a late-19th-century Wells Fargo stagecoach stop turned hotel and saloon in 1915. The ivy-covered brick building still looks the part, thanks to antique furniture, an old-timey front desk, a full-size bar with saddle seats, rusted tools as wall art, taxidermy and a distressed wood facade (returned to its original glory by an expert cabinetmaker in the 1970s). Enjoy the run of the house, which features nine period-appointed quarters, including a master with a copper soaking tub; a dining hall; a secret room; a wide back balcony; a picturesque outside staircase; a lawn area with gazebo; and a paved courtyard with a massive outdoor fireplace. Celebrities love it, too: Bon Jovi, Michael Jackson and Paul McCartney shot music videos there, and Kurt Russell used the site for a tasting of his wines. 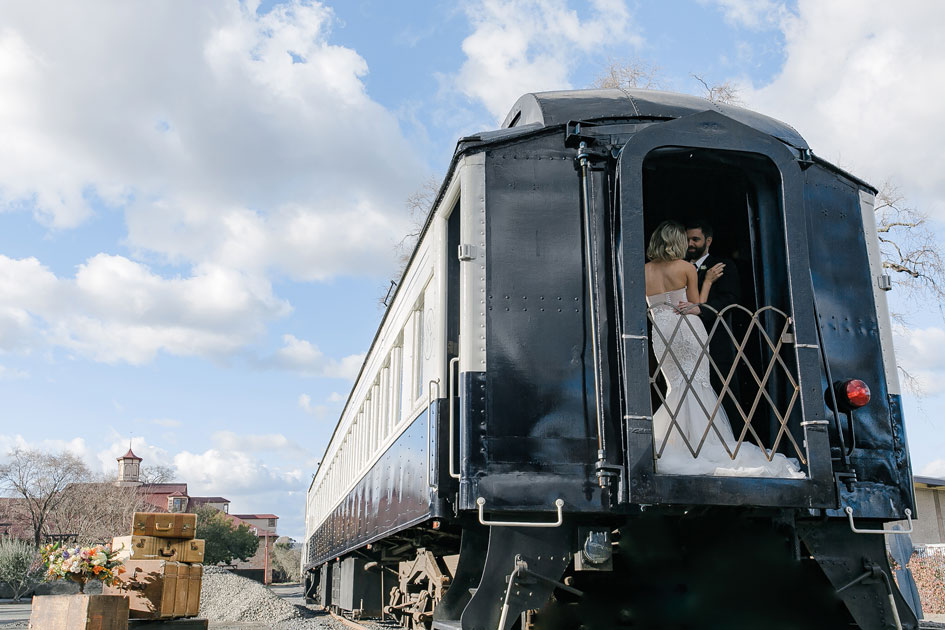 Chelsea Schroeder Photography
Planes, Trains & Automobiles
The Napa Valley Wine Train, which has been shuttling thirsty passengers aboard early-1900s Pullman cars since 1989 on a rail line dating back to 1864, offers a wine country wedding on wheels. Its new elopement package includes a photographer, an officiant and a bottle of sparkling vino. Ceremonies usually commence at the station or in a cabin before the three-hour journey and four-course meal begins. You’ll be riding in style, especially if you splurge on the Vista Dome car, with its curved glass windows and decked out in Honduran mahogany paneling, brass accents, etched glass partitions and plush armchairs. Arrange for a murder mystery or winery stops and be sure to grab the iconic “bon voyage” shot from the back deck of the caboose.

Car fanatics should motor over to El Segundo's Automobile Driving Museum, where an amazing collection of antique, classic and muscle cars, including a 1931 Ford Model A roadster, a ’57 Lincoln Convertible, a ’62 Impala and an ’82 Delorean are on exhibit. The museum is just five minutes from LAX and dozens of hotels. Celebratory laps in your favorite set of wheels can be arranged as can the use of the retro ice cream parlor.

Talk about rarified air. Turn the Pan Am Experience, an authentic theme dinner that recreates the glamorous golden age of air travel inside a Boeing 747 replica, into a private jet for 48. Start the trip at the check-in desk before admiring an extensive collection of Pan Am memorabilia in the Clipper Club. Once on board, there’s entertainment, safety demonstrations, fashionable stewardesses serving Chateaubriand and caviar, a bottomless bar and a dessert-and-digestif cart. The officiant can borrow an authentic captain’s uniform. Think of all the easy thematic tie-ins like boarding pass invites and luggage tag favors.

Credit Unions
Create priceless memories at financial institutions turned celebration spaces. The Hibernia, a neoclassical revival temple-style bank that was one of the few structures left standing after San Francisco’s 1906 earthquake, is a grand and storied option in the mid-Market district featuring a domed entrance, marble floors, stained-glass skylights, gilded details and ornate columns in the main hall. The third-floor penthouse with access to a rooftop deck and rotunda room under the dome is great for smaller groups while the lower level gives off industrial vibes with concrete floors, steel accents and exposed brick. Repurpose the original 1892 teller counter as a gift/cake table or buffet line and stash the photo booth or bar inside any of 5 vaults.

The Bank, built in 1955 as the Coachella Valley Savings & Loan, is a mid-century modern masterpiece with floor-to-ceiling windows, a free-form staircase and stone-covered circular bank vaults, all turned into intimate lounges perfect for group photos or private moments between the just marrieds.