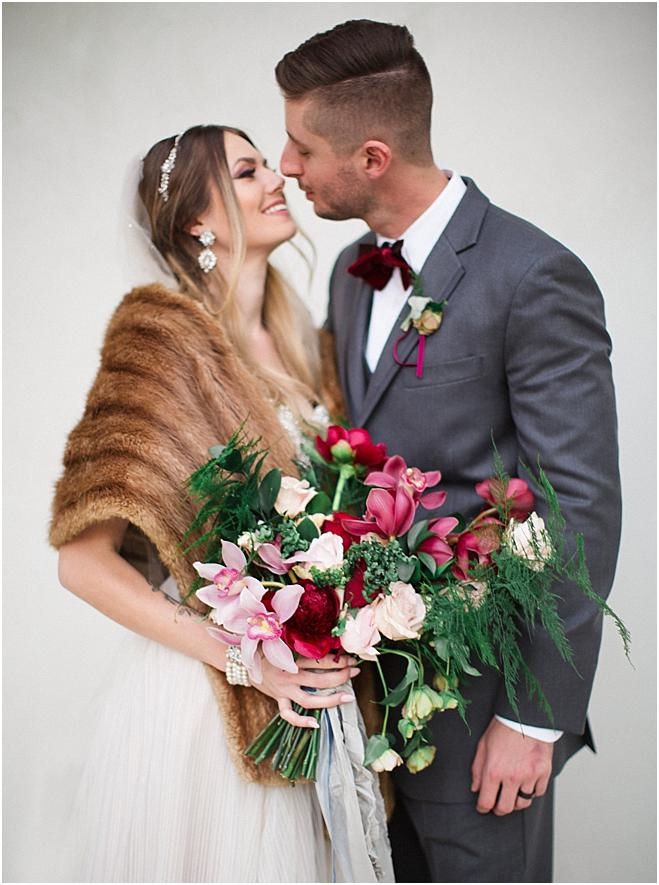 When Courtney and Philip were 15-year-olds living in Huntington Beach, mutual friends suggested they start talking on Myspace. After texting for more than a month, they finally met in person, and for Philip, it was instant love, so he asked her to be exclusive to him that night. Seven and half years and one son later, he made good on that initial feeling during a surprise visit to Caspers Wilderness Park. He handed Courtney 5-month-old Gunner, who was wearing a onesie that had “Mommy, will you marry Daddy?” written on the front.

The big day’s buzzwords were “understated drama,” “romantic,” “casual beauty” and “organic.” The bride wanted every detail to reflect them as a couple, from the majestic walnut tree bedecked in metal lanterns and the vintage transportation to the Polaroid guest book. To ensure that everyone was on the same page, planner Davia Lee painted two watercolors to illustrate her design strategy for the highly visual pair.

The high school sweethearts said their “I dos” beneath the limbs of Greengate’s massive walnut tree adorned with lanterns and lush florals wrapped around the trunk. Guests looked on from the rows of pews and bistro chairs adorned with lush green garlands. A rustic cart with vintage books created an inviting repository for the couple’s programs.

The Central California compound, which features stables, vineyards and a pond, is tucked into the Edna Valley and surrounded by rolling hills. The barn was transformed into a sparkling oasis via bistro lights, gauzy white fabric draped across the ceiling, and accented with chandeliers wrapped in dangling vines. The dinner tables were covered in lace, roses and ornamental candlesticks, while the sweetheart and cake tables were nestled near a faux fireplace dazzling with candlelight and draped in greenery. Vignettes that mixed antique furniture, oversize pillows, area rugs and gilded side tables welcomed people who needed to take a breather after dancing the night away under a starry sky.The rich shade of marsala wine was threaded throughout the event. The groom’s suspenders, socks and velvet bow tie came in the crimson hue as did the bride’s matching Prada stilettos. Boutonnieres and the scrollwork key favors were tied with similarly hued ribbons, and all printed materials, including the seating list and menus featured the deep red ink.