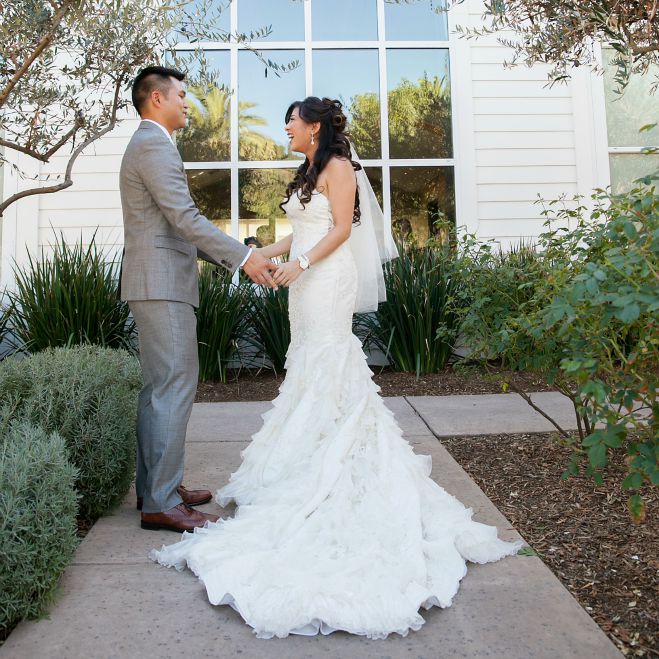 Their guests arrived from all over the world, and the couple really wanted to show them the essence of California, specifically the Bay Area, and why they love it so much.“We wanted the wedding to be a reflection of the best of the both of us, so we choose our favorite things about being Californian, and added nods towards our Chinese heritage via the design and food,” Say the bride. “We wanted the wedding to be fun, with the experience of the wedding to be Californian, whimsical and modern. This manifested itself through the food, decor, music… and lots and lots of personalized touches throughout the day.” The couple included California- shaped coral cookies, Cantonese-inspired canapés, fried chicken, suckling pig (a Chinese banquet staple) and fish tacos. Decor featured primarily coral and gold floral arrangements, backdrops, paper lanterns and table settings.

Because the bride and groom had family and friends coming from places all over the world, the couple had a custom-made map serve as their guestbook. Guests would stick a pin in the place from where they were coming and sign their names. For her something blue, Johanna wore a gorgeous sapphire ring given to her by her eldest paternal aunt. The ring was part of a jewelry set that her aunt bought with her first paycheck.

Incorporating their culture into their Californian wedding was an extremely important element for the couple. The wedding featured a westernized version of a traditional Chinese tea ceremony, which included all of their extended family members, as well as gifts of red envelopes from guests. Over the span of the day, they integrated multiple Chinese customs. The bride changed into four different outfits during the day, and wore phoenix and dragon gold bracelets; and the groom bought shoes for the bride’s brother. The bride’s parents also gave out special cookies to announce the marriage of their daughter, and a special string arrangement created by Golden Gate Strings of Radio Hong Kong’s wedding-announcement song from the 1960s was played.