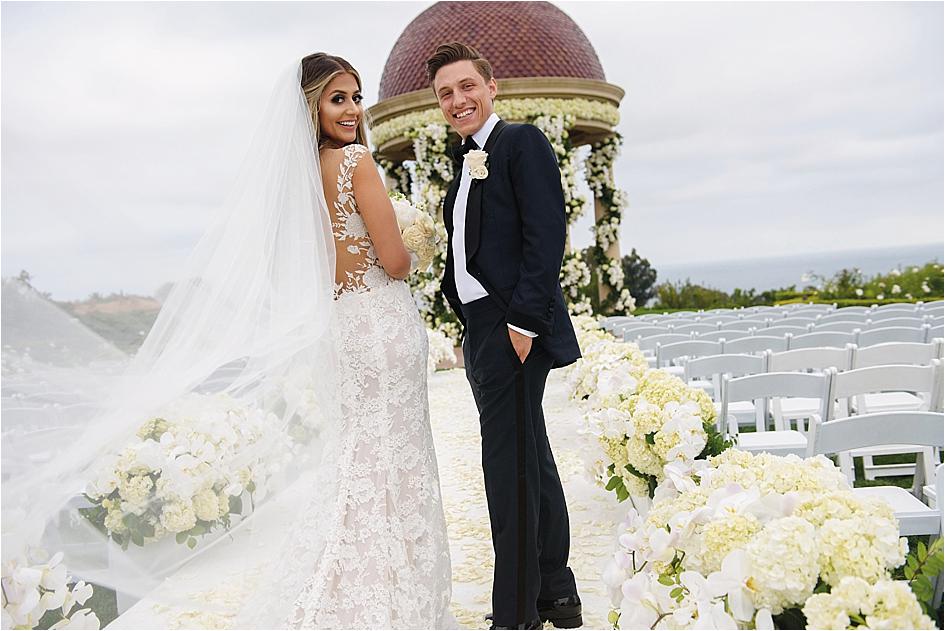 Ocean views have played a pivotal role in this couple’s relationship. Although they first met at a local Oktoberfest celebration, the ever-present Pacific found its way into their hearts through countless celebrations, including birthdays, anniversaries, holidays and any milestone throughout their seven years of dating. Case in point: Michael popped the question on Maui’s Big Beach as the two watched the sunrise; their engagement party was aboard a FantaSea yacht out of Marina Del Rey; and Lilly’s bridal shower was at Shutters on the Beach in Santa Monica. With its expansive views of the Pacific, The Resort at Pelican Hill offered the perfect place for their nuptials.

Both of the Birchers work in the fashion industry, so the idea of an elegant black-tie wedding appealed to them—but they also envisioned a couture way of including the beach. The result was an all-white wedding with rich navy details. Along with their planner, Jacqueline Sheen, the couple collaborated with East Six to design acrylic, mirrored invitations inside a blue crushed velvet box, stamped in silver with a nautical anchor and the letter B. Other rich blue moments included the menus, cigar wrappers, matchboxes and programs. The groom even opted for a classic, midnight blue Tom Ford tuxedo, while the bridesmaids were decked out in “The Lilly Gown,” custom-designed navy dresses named after the bride.

The Rotunda at Pelican Hill, with its shimmering ocean views, was draped with a stunning amount of phalaenopsis orchids and hydrangeas. Glass pillars topped with flowing arrangements flanked the white-carpeted aisle. As the couple sealed their vows with a kiss, white doves were released into the sky.

Reflective surfaces mirrored the classic and romantic touch the couple had envisioned, from the hand-calligraphed escort-card display to the cocktail cards and table numbers. At the reception, glass tables were accented by tall glass cylinders filled with phalaenopsis orchids, garden roses and peonies. Acrylic menus set in glass chargers upped the elegance. The seven-tiered cake with a “B” monogram was suspended from a delicate glass chain, with floral draping around the bottom.