Ready to Where: Dreamy Locations For Your California Wedding

Time to select a setting for your celebration? From a Southern California country club to a cliff-top lodge on the North Coast, these haute spots are happy to host your perfect day
By:
Carrie Bell
Issue:
Winter 2018 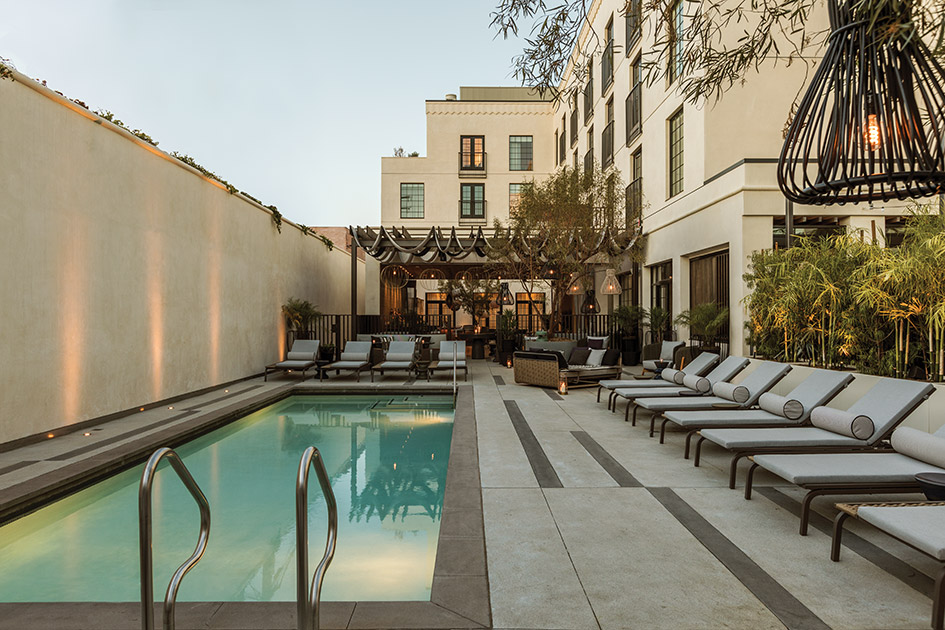 Whether you are planning to tie the knot in Sonoma, West Hollywood or Newport Beach, a variety of new resorts and gorgeous venues have opened their doors and are ready to host your wedding.

Kimpton La Peer Hotel
As expected from the first hotel in West Hollywood’s Design District, the Kimpton La Peer’s 105-room boutique’s interiors are de rigueur and daring. Picture graffiti walls and art installations with mix-and-match prints and materials. Inspired by the topography of Los Angeles and nature, Icelandic designer Gulla Jónsdóttir juxtaposed a cool color palette with live greenery and pops of deep purple. La Peer has partnerships with Cake Monkey (mini desserts), Ole Henriksen Spa (express facials and bath butlers) and Bottle Service (mimosa bars and martini carts). There’s also a house Tesla from EVX Limos, which makes for memorable arrivals, and a variety of bike options for exploring available through Bikes & Hikes. What it lacks in ceremony space, the hotel makes up for in reception options. Smaller parties of 60–80 can dine in the Drawing Room (striped walls provide an adorable photo backdrop), before taking over the attached courtyard, bar and pool deck. The 4,000-square-foot rooftop will accommodate as many as 180 guests, all of whom will gawk at the panoramic views of downtown’s skyline, the Hollywood Hills and, on a very clear day, Santa Monica. Menus by Tasting Kitchen’s Casey Lane, whose new Italian concept restaurant is on the ground floor, will score points with foodies.

Rolling Hills Country Club
This 160-acre private golf and social compound on the Palos Verdes Peninsula showcases the South Bay at its most sophisticated. Newly constructed, the country club’s contemporary ranch design by architect Robert Altevers (The Resort at Pelican Hill) reflects the tony Palos Verdes neighborhood. Featuring sweeping panoramic views of Los Angeles, the club sports a 70,000-square-foot clubhouse, 18-link golf course designed by David McLay Kidd, state-of-the-art technology and refined amenities. Three hundred can fit in the airy, bright ballroom with room for a dance floor. Smaller dining rooms offer the same customizable catering from Chef Johnny DeVivo and packages for more intimate festivities. Couples who prefer sunshine and cityscapes should opt for an outside ceremony on the extensive lawn followed by cocktails under the arbors or by the fire pits.

Lido House
This Newport Beach newbie, an Autograph Collection hotel and spa built on the former site of a city hall and flanked by a bustling harbor and sandy strands has a preppy Cape Cod flair (shutters, a turret shaped like a lighthouse, wide stripes and rope accents) with West Coast weather and OC polish. Have a pool party in the saltwater plunge, a chef-driven rehearsal dinner at The Mayor’s Table, a formal sit-down for 250 in the 3,000 square-foot whitewashed Boathouse Ballroom or celebrate outside on the lawn and deck. Lido also offers a comprehensive Champagne menu at Topside, the only rooftop bar in town (which also happens to be as large as the ballroom.) Make one of the five three-story cottages your base of operations and use its kitchen, barbecue grill and rooftop patio for your final night as a single lady or for a farewell brunch.

Santa Ynez Inn
Over the past two years, thanks to renovations and some decadent guest programming, this longtime staple of Santa Barbara wine country has become a refined and romantic contender in the wedding weekend game. Capitalize on the property’s standard inclusions (such as a daily wine-and-cheese hour, hot breakfast, free tasting passes for 20 of the valley’s wineries) to occupy downtime. Hold a pregame whiskey tasting in the library, which, along with the other common areas and 20 rooms, was given a face lift. The lawn has also been redone to include fire pits and a tall brick hearth. The pièce de résistance is the refurbished historic Coach House, with its wood floors, dramatic chandeliers, beamed ceiling and candle-covered brick wall. The main chamber seats as many as 80 guests at king tables, and when the meal is done, folks can cozy up to the vintage bar in the front lounge or exit through the oversize barn door to the twinkle-lit patio.

Sanctuary Beach Resort
This oceanfront Monterey Bay resort finally has a food and beverage program and an indoor reception spaces to match the majesty of its toes-in-sand ceremonies. The stand-alone Salt Wood Kitchen & Oysterette Restaurant, opened last fall, specializes in seafood and wood-fired preparations, and sources ingredients from regional farms, waters and ranches. The entire restaurant, with its coastal color scheme, is available for buy outs. Smaller groups (16–60) can set up in the two function rooms, adjoining foyer and wraparound porch. The wainscoted walls, weathered tables, big windows, gas fireplaces and gable ceilings give both rooms a slightly Scandinavian vibe.

Timber Cove Resort
The nine-month Novogratz-helmed overhaul of this 46-room Frank Lloyd Wright–reminiscent gem, just north of Jenner on the rugged Sonoma Coast, will appeal to hipster couples dreaming of boho nuptials. After all, the grounds feature a 93-foot-tall totem by Beniamino Bufano and the rooms sport pour-over coffee kits and record players. Congregate by the stone hearth in the great room while sipping craft cocktails from the lobby bar, set up a bocce tournament, or play a round of pingpong, foosball or pool on the patio. Say “I do” in a meadow that overlooks the water and the forest, followed by a dinner for 60 served in the Ansel Adams Room, with its unusual redwood tree columns, round centerpiece window and redwood deck.

The Garland
A retro-style boutique hotel tucked away in North Hollywood, The Garland features a rich Hollywood history as it was originally founded by actress Beverly Garland as a chic hideaway for friends and family. Now owned by Garland’s son, the hotel rests on 7 acres and offers a variety of wedding spaces, including the soon-to-be-renovated Garland Ballroom. Current plans include installing windows to bring in natural light as well as doors to enhance an indoor-outdoor flow to the Edison-bulb-strung courtyard. Couples looking for an outdoor space can tie the knot in the 4,000 square-foot Beverly Park (as many as 250 guests), a hidden garden tucked beneath sycamore trees. Larger head counts can be accommodated by the recent addition of Beverly Park West, which adds an expansive 5,200-square feet. Separated from the main garden by iron gates, the space can be transformed into a reception area, with plenty of space for a seated dinner and dance floor. Move the party inside one of the ballrooms for a music-fueled after-party atmosphere. Recover the next morning at The Frontyard, a chic option for a post-wedding brunch (don’t miss the Nutella-stuffed French toast).

The Gravel Lounge is the newest addition to Round Pond Estate’s already dynamite roster of private event spaces, which include the Napa Valley winery’s tasting room terrace and big red barn. The open-air “room” is tucked into the vines on the western edge of the Rutherford vineyard and looks out at the Mayacamas Mountains. The reedy roof lets sunlight trickle down over a smattering of concrete-topped rounds and bistro chairs in the company’s signature orange, making it perfect for spring soirees and showers. The in-house chef will create a seasonal feast incorporating the winery’s big, bold reds, artisan olive oil line and fresh ingredients from the giant garden. To celebrate its 10th anniversary, The London West Hollywood upgraded their lobby bar, lounge and Boxwood on the Roof restaurant, and introduced afternoon tea service. The new look is country-house conservatory chic (skylights, latticework frieze, polished marble). One section can be cordoned off for a private gathering to sip Earl Grey. The best part? A donation to a local animal shelter adds the hotel’s resident bulldog puppies, Winston and Churchill, to the guest list.The high-tech kitchen, open floor plan and third-floor balcony make the French Regency art maison Leclaireur Los Angeles far more than a gallery. After mingling among the contemporary masterpieces, which include painted cabinets by Fornasetti, 40 of your nearest and dearest can ascend to the top floor for a seated meal.