A Beautiful Beach Wedding Complete With A Charming Casual Style 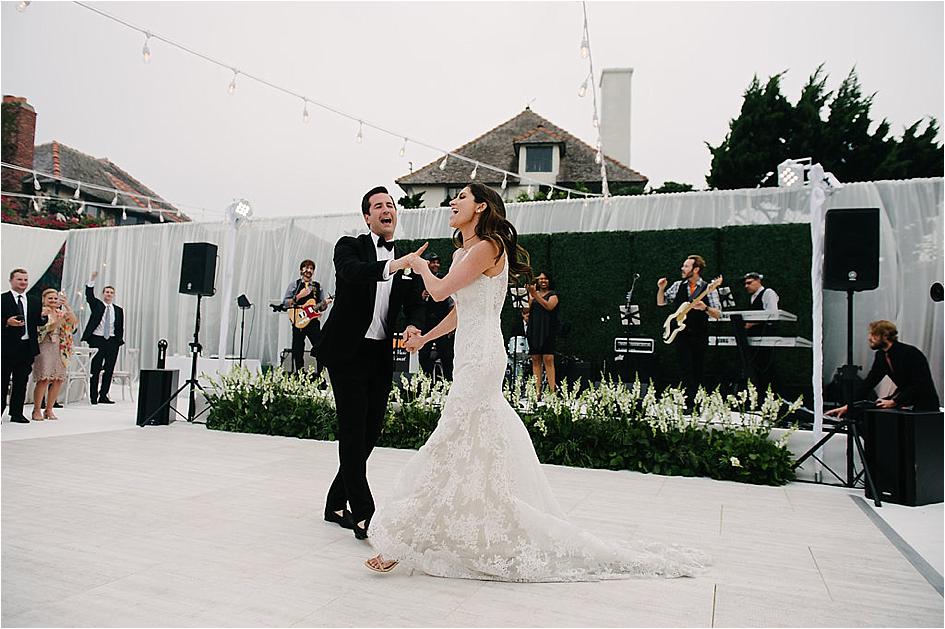 At a mutual friend’s wedding in 2013, Nicole and Matt, both newly single, were seated together in an obvious setup that they didn’t appreciate…at first. They danced, laughed and stayed up the whole night talking. She left knowing she’d met “the one,” but unfortunately for the Santa Monica resident, the one lived in Singapore. But they didn’t let the drastic time difference keep them from talking every day. When he moved to New York, they officially started a long-distance relationship.

Nicole’s grandparents built a retreat in a Breton-inspired private enclave in Oceanside called St. Malo back in the ’60s, and Nicole spent many weekends and holidays in the Oceanside neighborhood. It was there that she learned to surf, gazed at the stars with her late father, challenged her brothers to fierce games of ping pong and where eventually she started to bring Matt. During their annual pre-Thanksgiving weekend stay in 2015, Matt popped the question while they were walking her mom’s dog. They considered venues from Napa to Cape Cod, but ultimately decided to get married at Nicole’s “happy place.”

Preserving the natural beauty of the surrounding environment was the main design goal for the sandy ceremony. The couple opted for low wood benches and a curved aisle lined with snapdragons, which are plentiful in the area and evoked a fond memory Nicole has of her father. The arbor, built by her brothers, was covered in white roses, another flower commonly found in the community.

The pair wanted an “elegant coastal dinner party” that felt “approachable, bright and more casual than glam.” Kerrie Underhill of Platinum Weddings by Kerrie transformed the community’s tennis court with billowy soft white draping, a flood of candles and low centerpieces decorating the tables. A palette primarily of whites and light woods (and even some whitewashed wood) was used for flowers, furniture, place settings and linens. A soft blue that mimicked the ocean appeared on bridesmaids’ dresses, goblets, hand-painted plates, ribbons and escort cards.

Janelle Sing created a romantic watercolor crest for the new family that incorporated the charming St. Malo gate, local flora, blue and their initials. It decorated programs, pillows, signs and even the matchbox favors. In keeping with the theme, the head table was treated to delicate monogrammed napkins.

The couple never partakes in what they consider “an archaic wedding dessert” so they chose to hire baristas to serve affogatos and espresso martinis from a gorgeous copper coffee maker. After the reception, a beach party with a proper bonfire meant s’mores were on the menu. 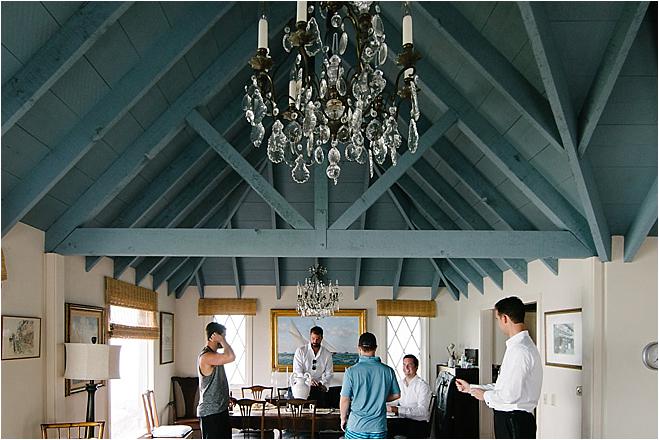 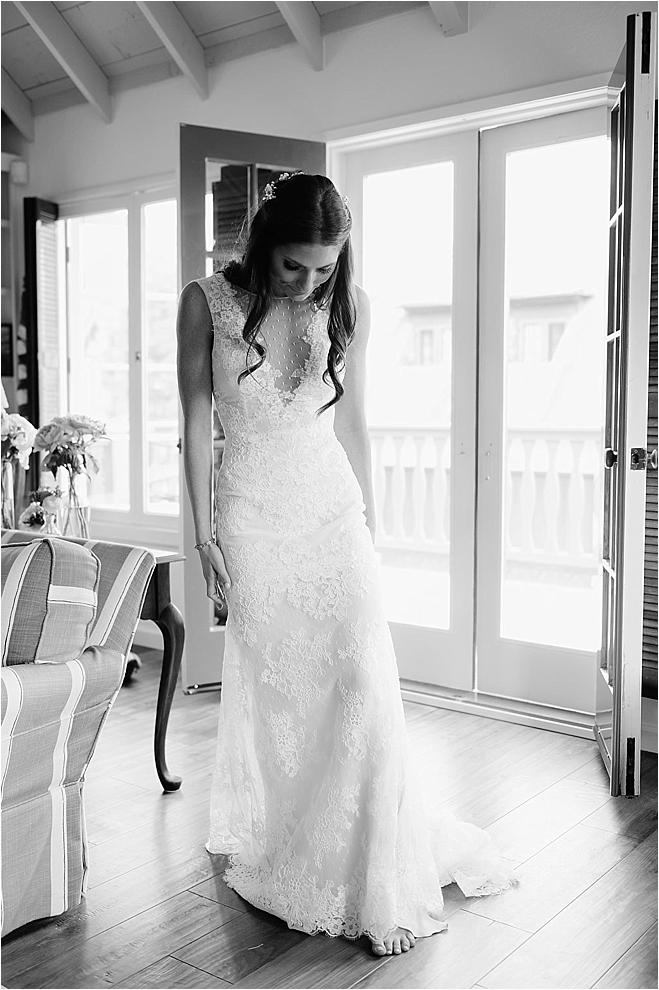 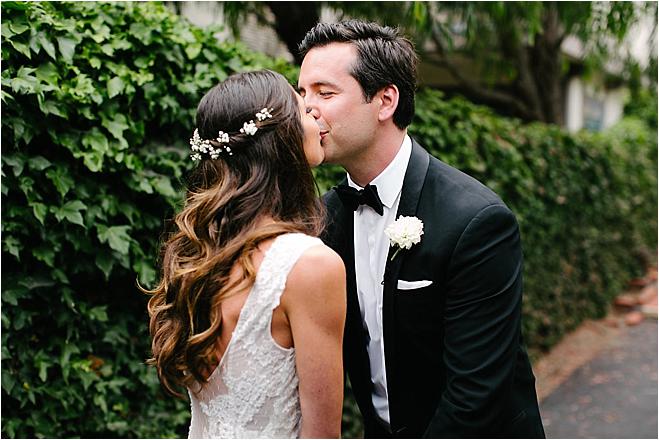 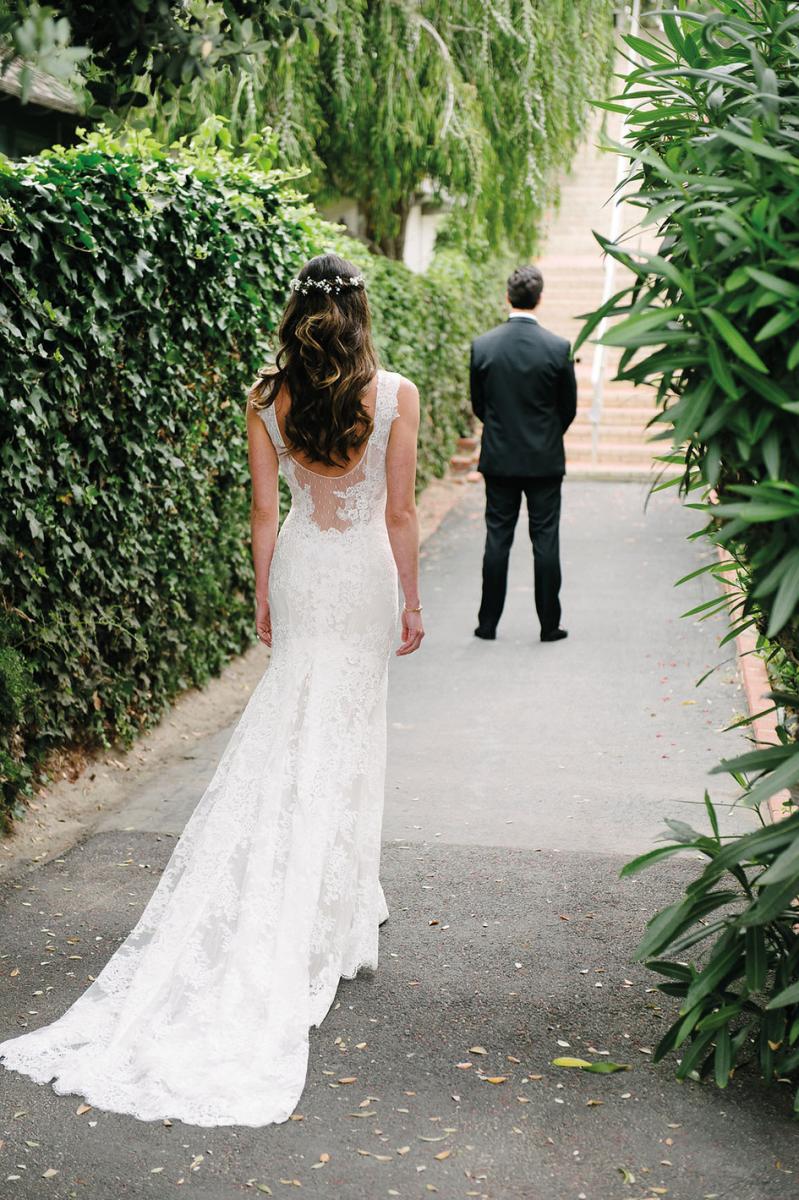 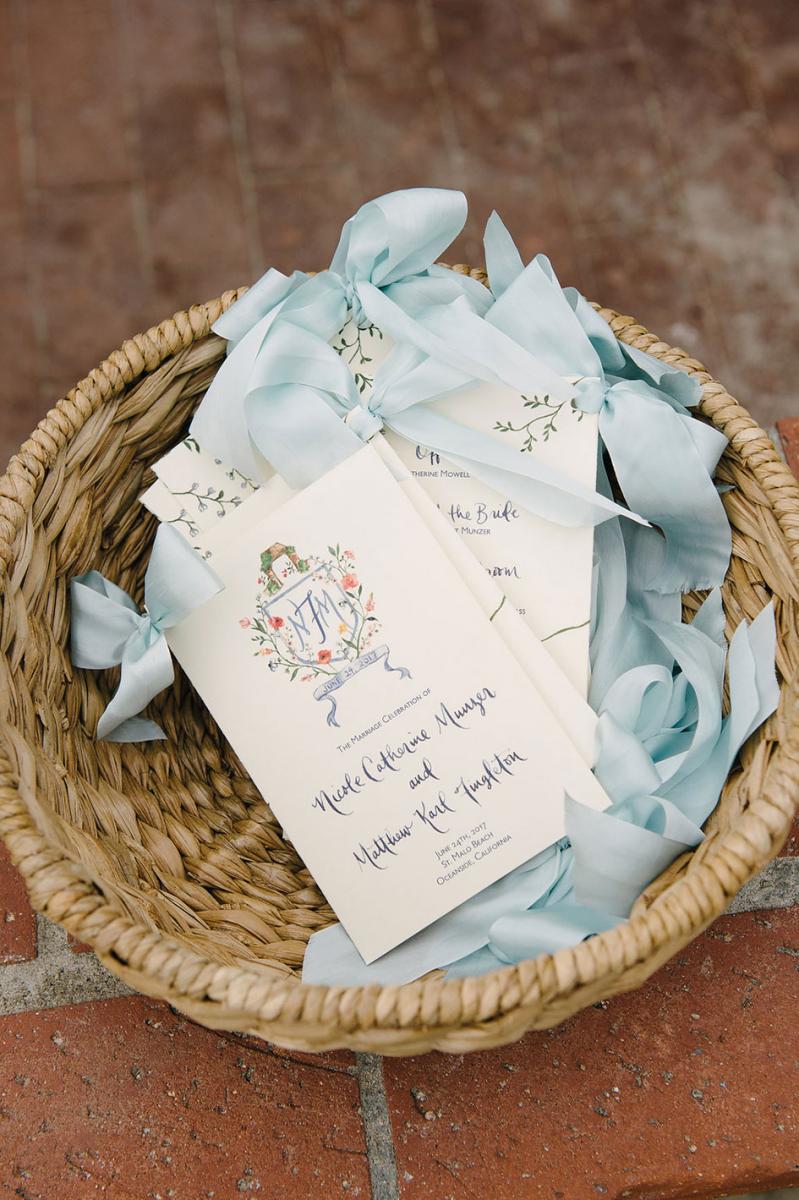 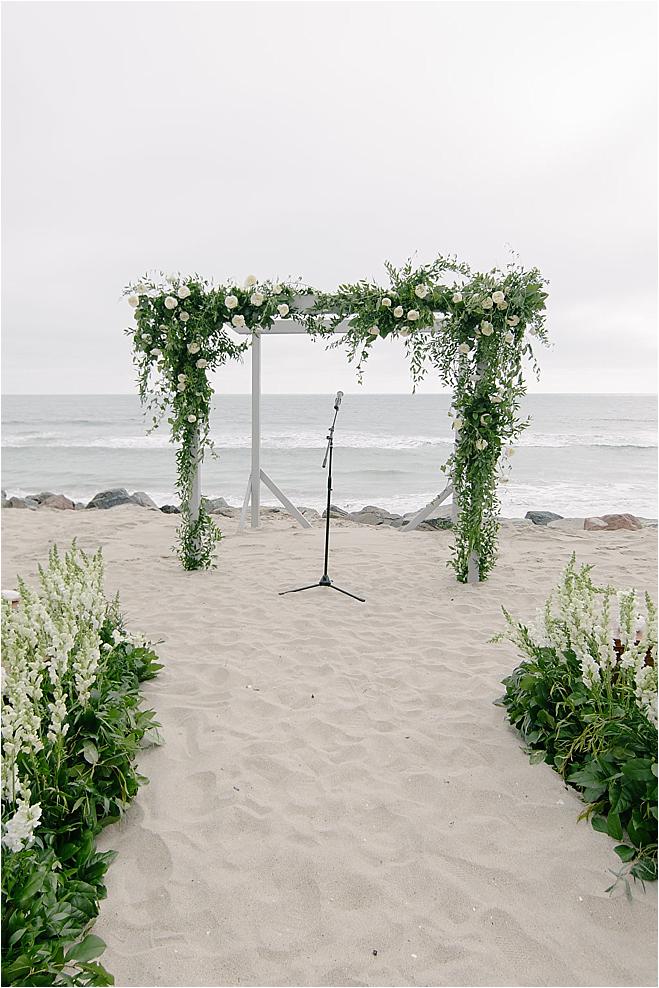 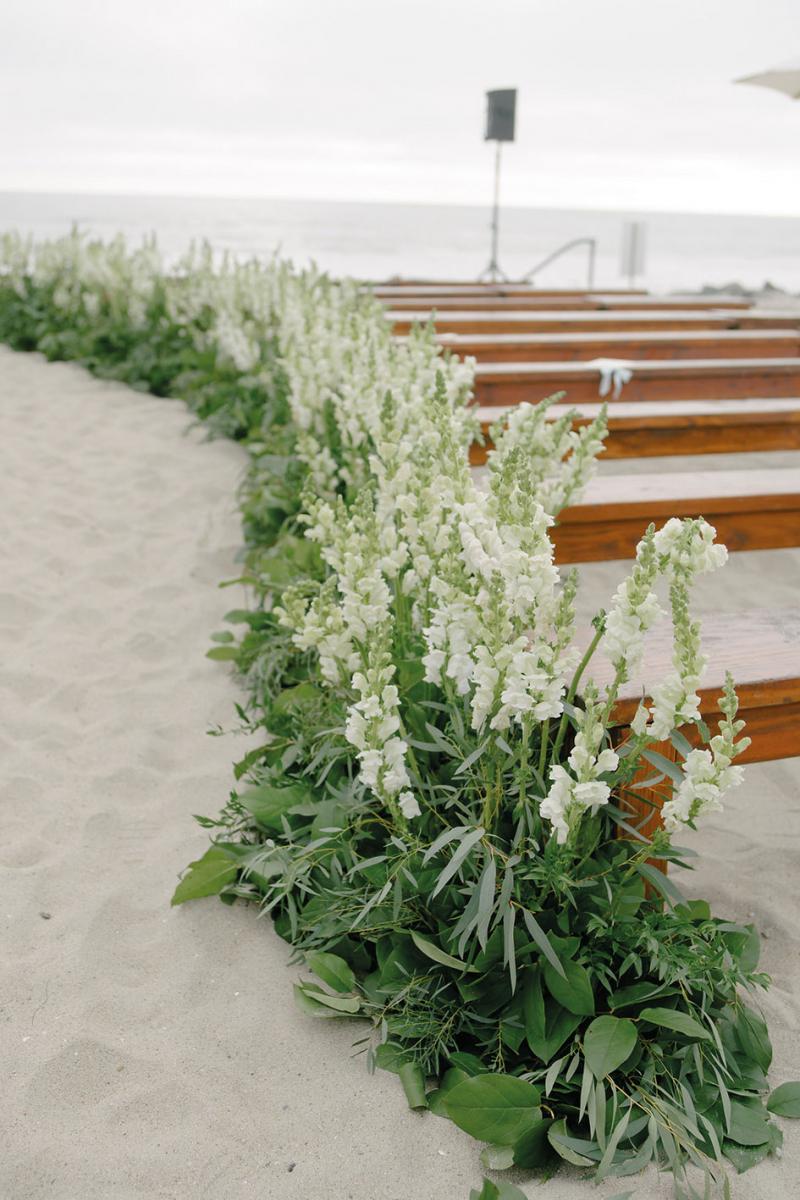 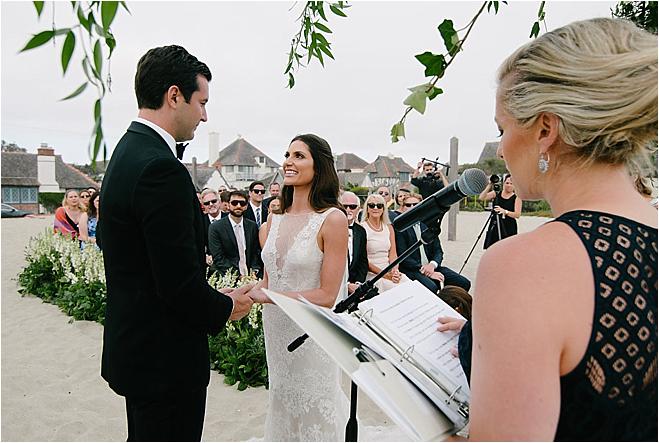 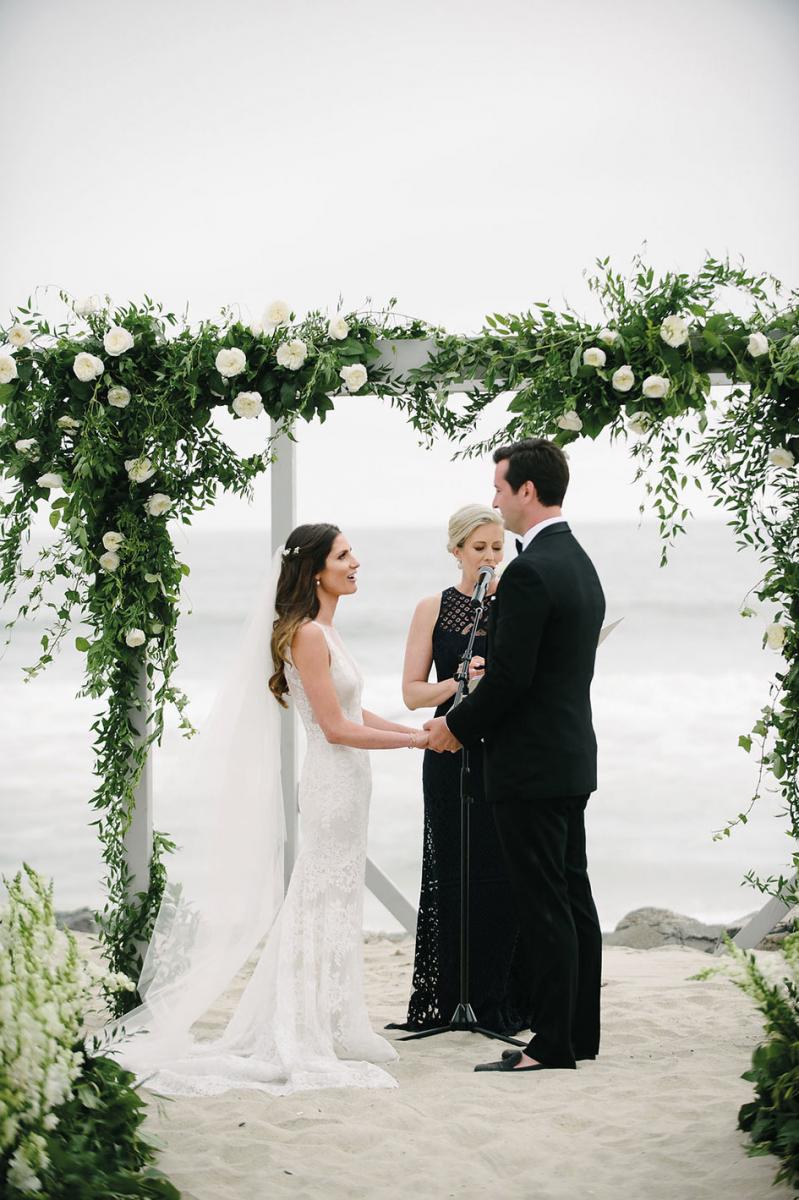 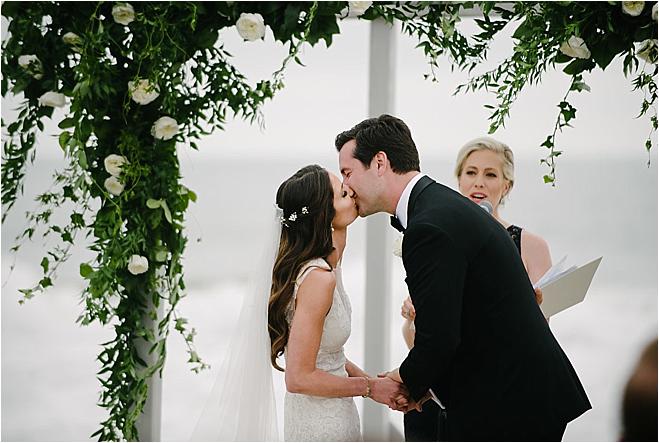 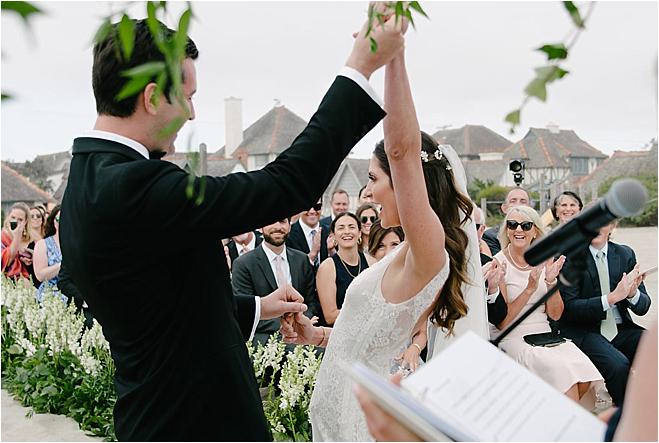 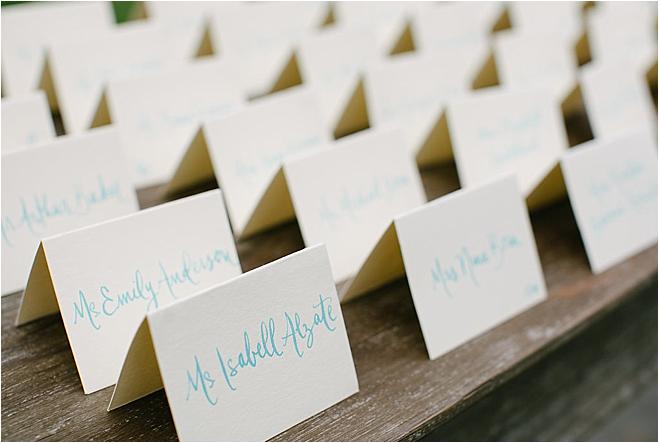 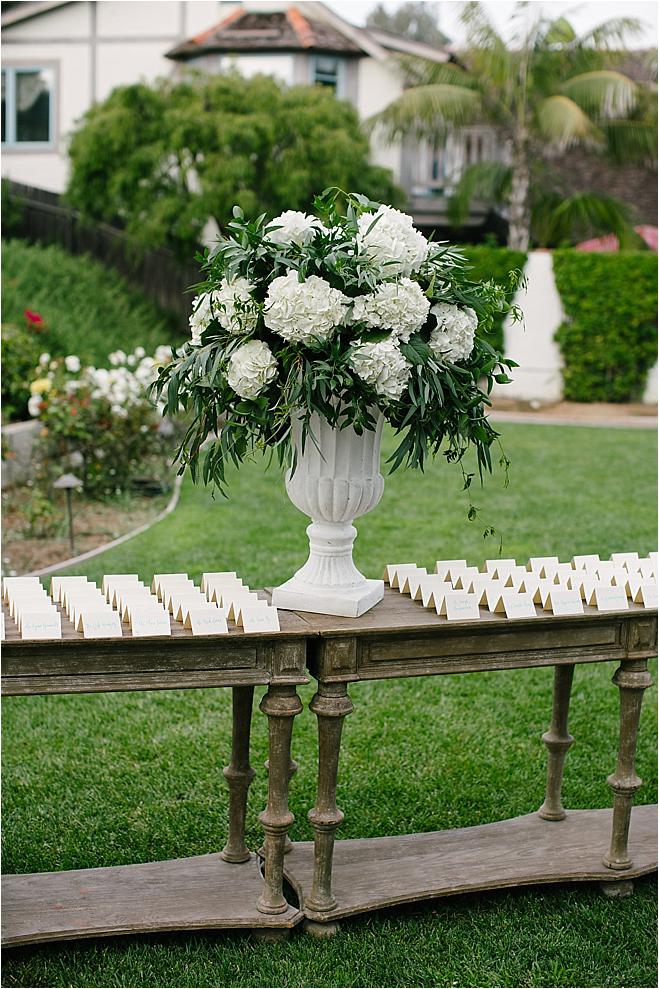 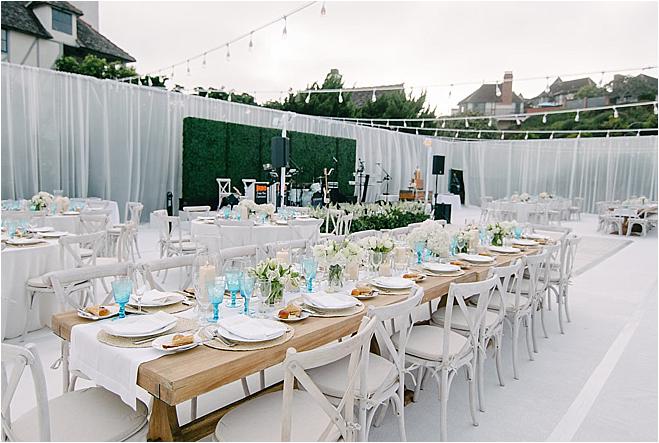 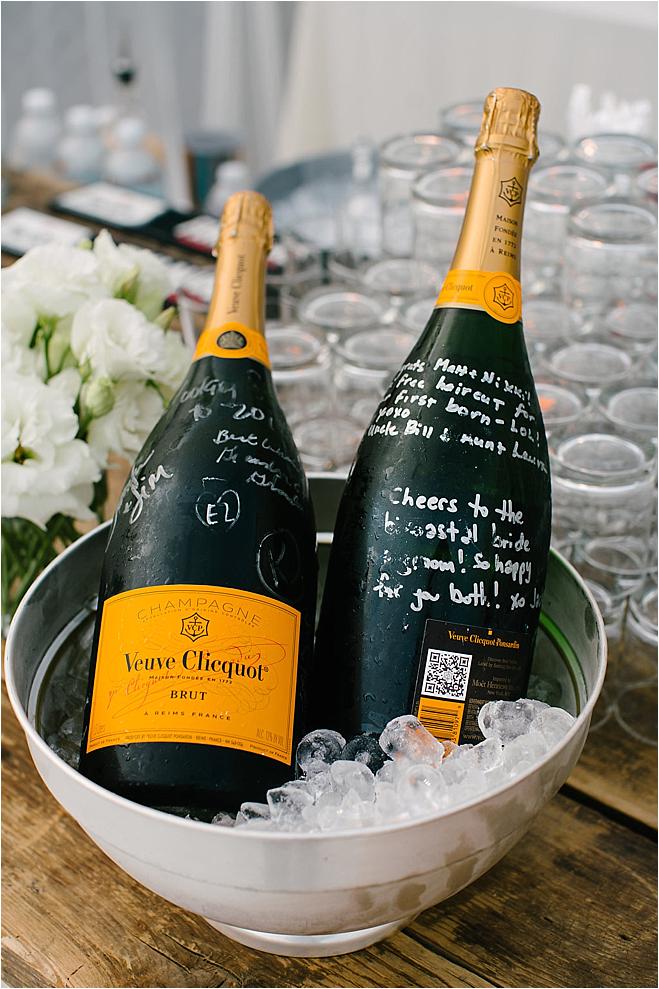 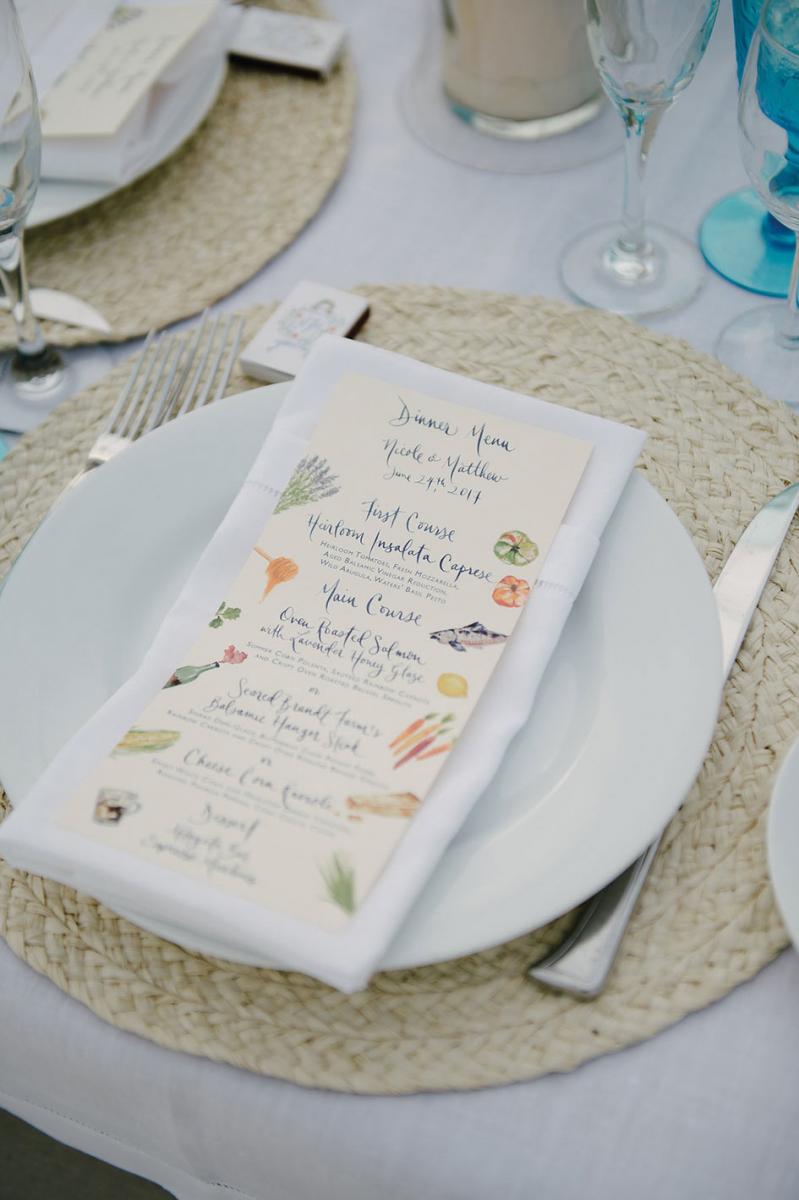 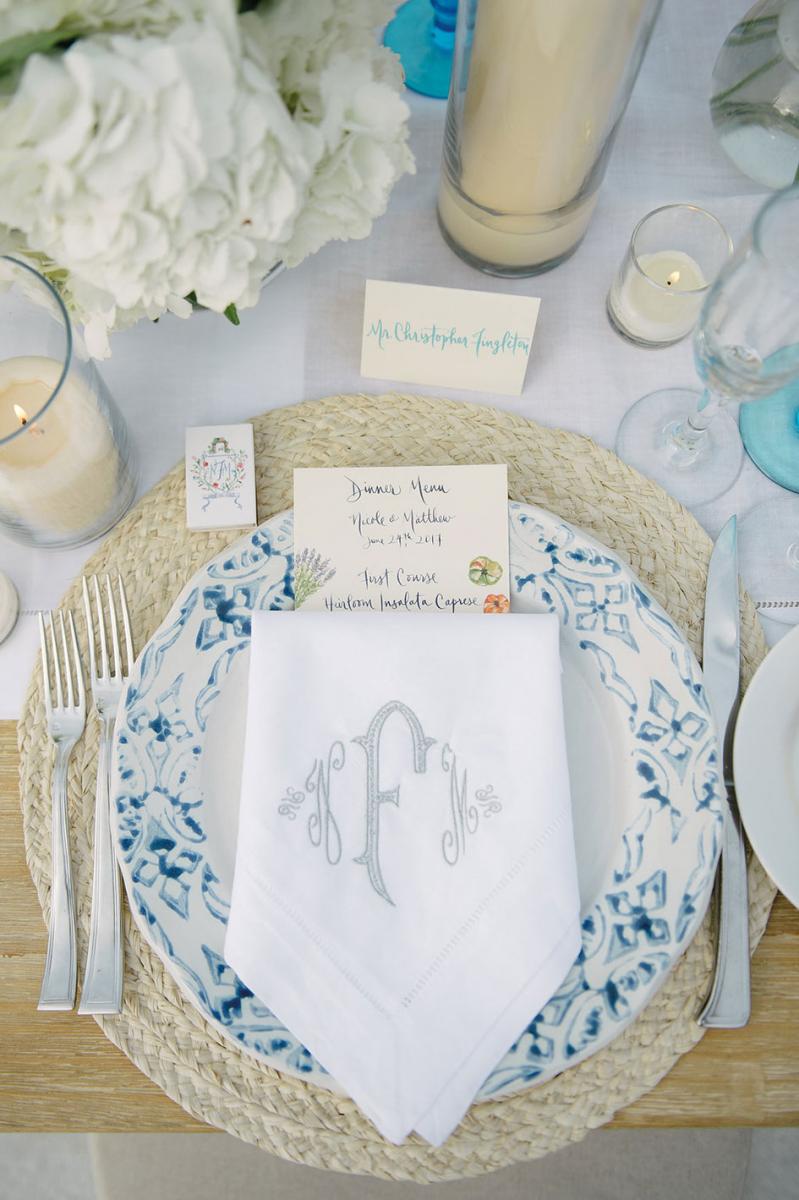 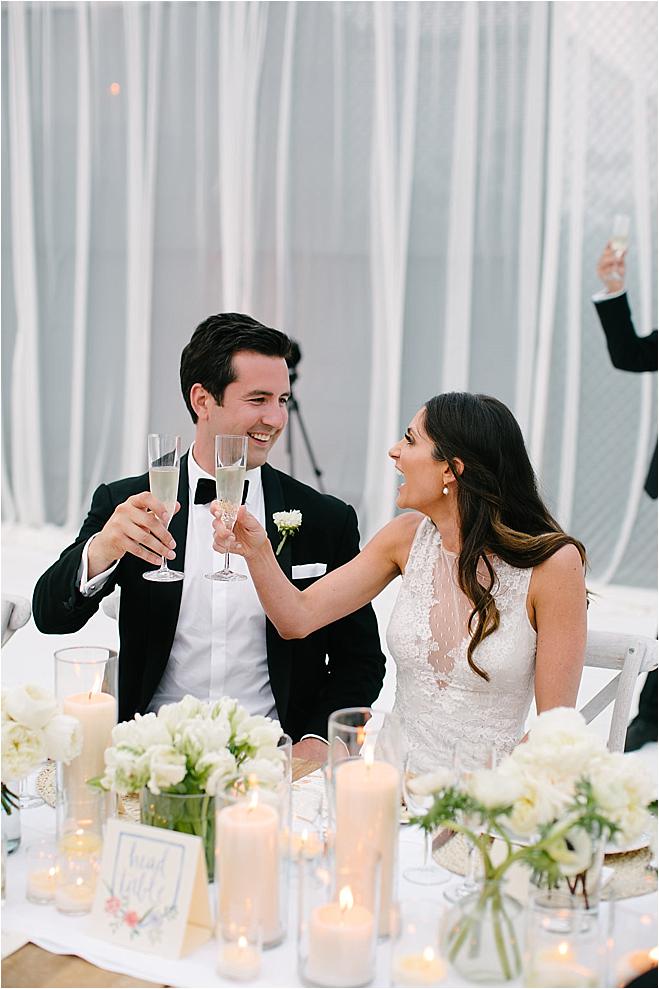 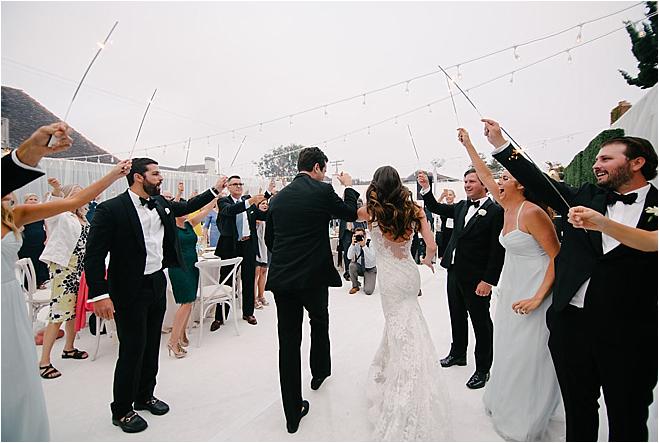