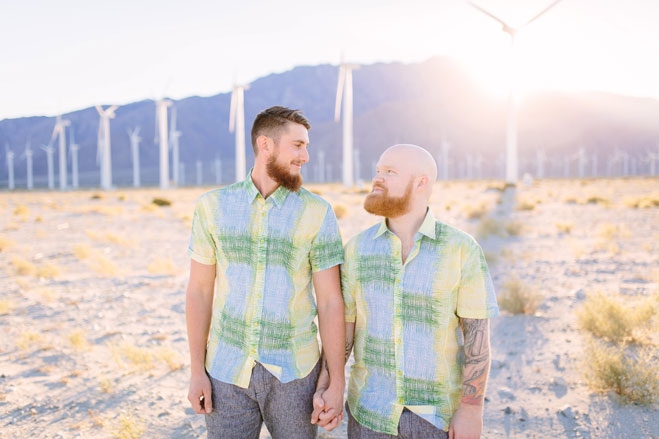 After meeting two years ago on New Year’s Eve in Alex’s hometown of Vancouver, Canada, LA-based Josh decided it was time to end the long-distance dating. He popped the question during a sunset picnic at Malibu’s El Matador State Beach. Josh created a one-of-a-kind moment by updating the lyrics to their song, Klangkarussell’s “Sonnentanz” (“Sun Don’t Shine”), to reflect their relationship. Josh rerecorded the vocals himself and after pulling a few favors from music industry connections, managed to get the original instrumental track to create a personalized recording.

Their hashtag says it all: #KillerWedding. With guests traveling from all over North America for their big day, Josh and Alex wanted every moment to be memorable and truly unique. Finding a blank slate to build upon was key, and Palm Springs’ Snapshot Studios, with its warehouse atmosphere, fit the bill. They unveiled cool surprises for their guests throughout the evening, from hiring a Broadway-touring magician (because love is magical!) as their officiant and hosting a giant, palm-tree-festooned bouncy house at the reception.

Josh and Alex opted for a desert-camouflage-inspired wedding, featuring earthy tones and nods to nature—air plants and succulents—with a few skulls thrown in. Their passion for street-style art and an affinity for skulls, quirky shapes and patterns added an unusual and personal vibe to the décor throughout the space, from the menus and cornhole game to the tabletops and photo booth props.

Josh and Alex tapped LA-based artist Nic Hawkins to create a killer parting gift for their guests, a coloring book of their story crafted with “hyper-yet-minimal street art meets tattoo caricatures” featuring the couple, the wedding party and their families. The comic-book-style art also appeared on escort cards, cocktail napkins and a movie-style poster.