Marissa & Jordan: Gorgeous Wedding Inspired By The Beauty Of The Ebell of Long Beach 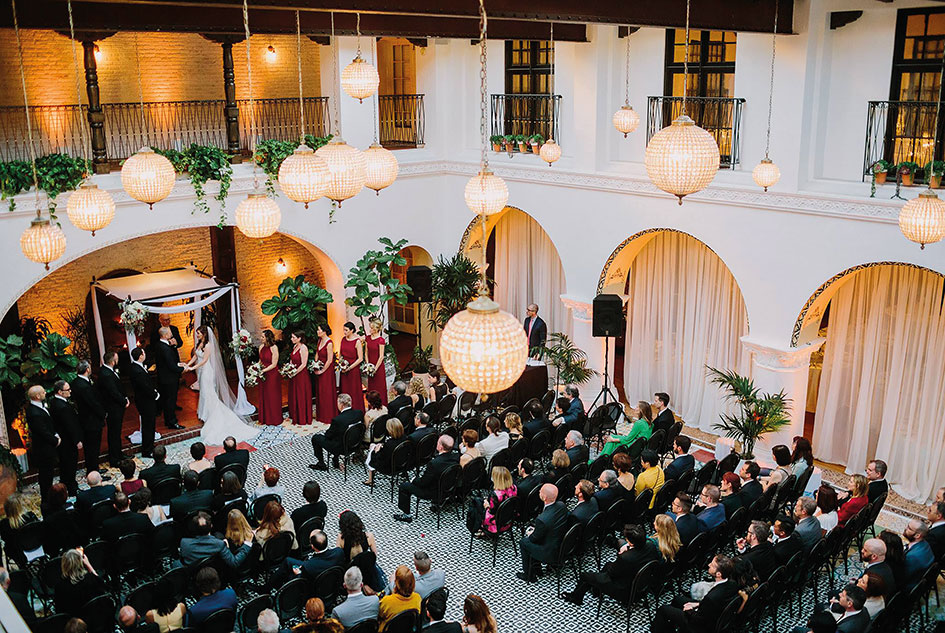 Marissa Berlin and Jordan Rosenberg claim they hold the record for the most wedding-venue tours ever taken. Finding “the one” was proving impossible—until they saw The Ebell of Long Beach. “As a couple, we’ve always taken a lot of pride in our home and have a very similar decorating style,” explains Marissa. “When we saw The Ebell, we both said, ‘I want to live here!’”

Their event design combined their love of antiquing with the venue itself. They wanted the design to feel timeless and as if it belonged at The Ebell, a former women’s club built in 1924. They incorporated some of their favorite home decor, including their antique bar cart, which was used for the cake display. The classic red rose served as their color muse, balanced by neutral creams and blush tones. To complement the venue’s lush potted greenery, a touch of green was added. “I tried to think of the venue as a person with likes and dislikes,” says Marissa. “If I wasn’t sure about a choice, I would ask myself, “Would The Ebell like this?’”

Marissa and Jordan tied the knot beneath a traditional chuppah. Flower Duet, the mastermind behind their stunning florals, incorporated three types of deep red roses, which perfectly accentuated the bride’s red lipstick, mixed with soft pinks, whites and green succulents. As an ode to her grandmother, who volunteered at the New York Botanical Garden, Marissa asked the florist to incorporate cherry blossoms into the floral design. “I have a vivid memory of first seeing cherry blossoms in the lobby at the Metropolitan Museum of Art in NYC and asking my grandmother what flower that was,” remembers Marissa. Flower Duet found the perfect in-season doppelgänger—quince branches—to evoke that memory.

Moxie Bright Events went above and beyond for Marissa and Jordan (and their wedding party!) by putting together “worry-free wedding kits,” complete with anything the couple could need on their special day. The kits included necessities such as deodorant, razors, shaving cream and lint rollers along with quick fixes for headaches, heartburn and bad breath—perfect for a nervous bride and groom!

Jordan and his mother share a love of the band Metallica and have been to numerous concerts together. The couple thought it would be fun to incorporate their common interest by having them dance to “Nothing Else Matters.”

The couple danced the night away to the lively sounds of a Gypsy jazz swing band and Jordan documented every moment. Throughout the reception, he rocked a hat with a portable camera attached so the couple could relive the memories for years to come. “Neither of us would have bet on having the best night of our lives. After all, we’re two somewhat cynical writers,” says Marissa. “But as we moved through the evening, the pieces of the puzzle we’d been constructing for a year fell into place.”