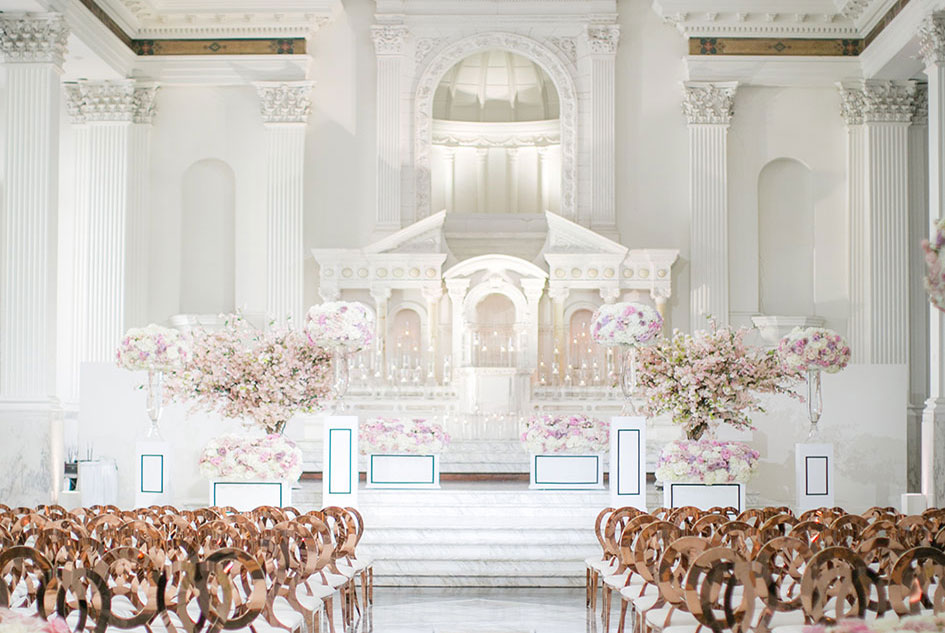 Amber Bryant and Rodney Hudson met during college at Florida State, with their romance budding through their love of sports, as he played football (and later joined the NFL) and she played softball. Eight years later, Rodney asked Amber to marry him while the couple were out on a movie date. They were running late, and while Amber kept urging Rodney out of the car, he continued to fumble around in the driver’s seat. “I finally walk around to his side of the car, and lo and behold, he’s down on one knee, asking me to marry him,” says Amber.

Gorgeous hints of rose gold and pops of navy created a striking palette against the classic white architecture of the venue. Amber’s elegant bouquet incorporated lavender freesia and an assortment of soft roses. Lush cherry blossom trees and romantic luminaires flanked both sides of the stunning altar, where modern pedestals and navy pinstripe boxes showcased breathtaking floral arrangements in hues of pink, lavender and ivory.

To tie in the architecture and style of Vibiana with their theme, event designer A Good Affair incorporated the classic pattern of marble throughout the decor with touches such as mirrored acrylic menus and table numbers. A grand marble cake graced with sugar flowers served as a one-of-a-kind design element—and a delicious treat.

Amber and Rodney’s three adorable dogs were used as design inspiration for the reception, with their images appearing on custom acrylic drink stirrers and place cards. Low floral arrangements of roses and hydrangeas accompanied tall table centerpieces placed atop glass trumpet vases, creating a dramatic and elegant look. Navy napkins accented the luxe table settings, while elegant glassware added to the effortless sophistication of the space. 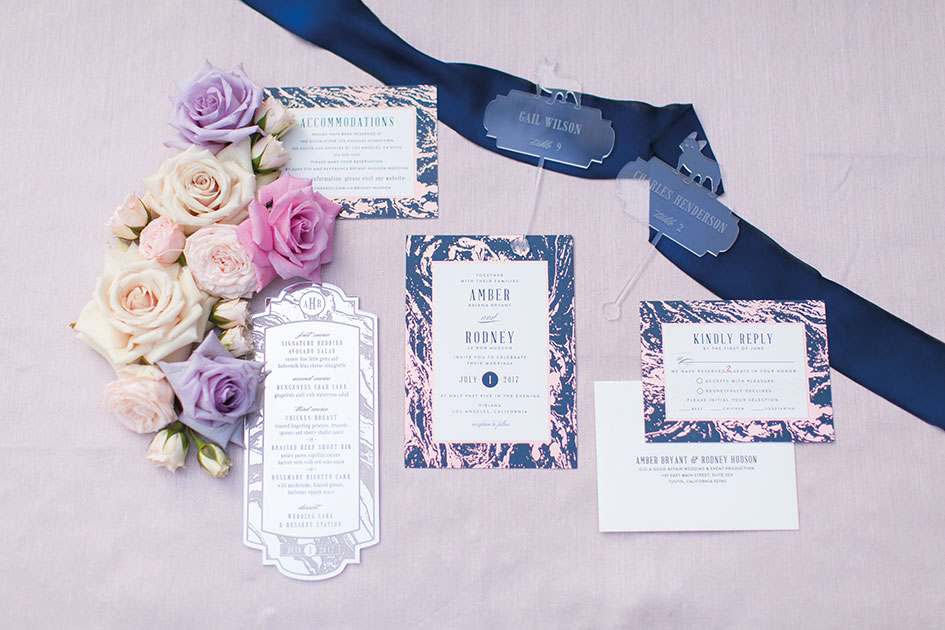 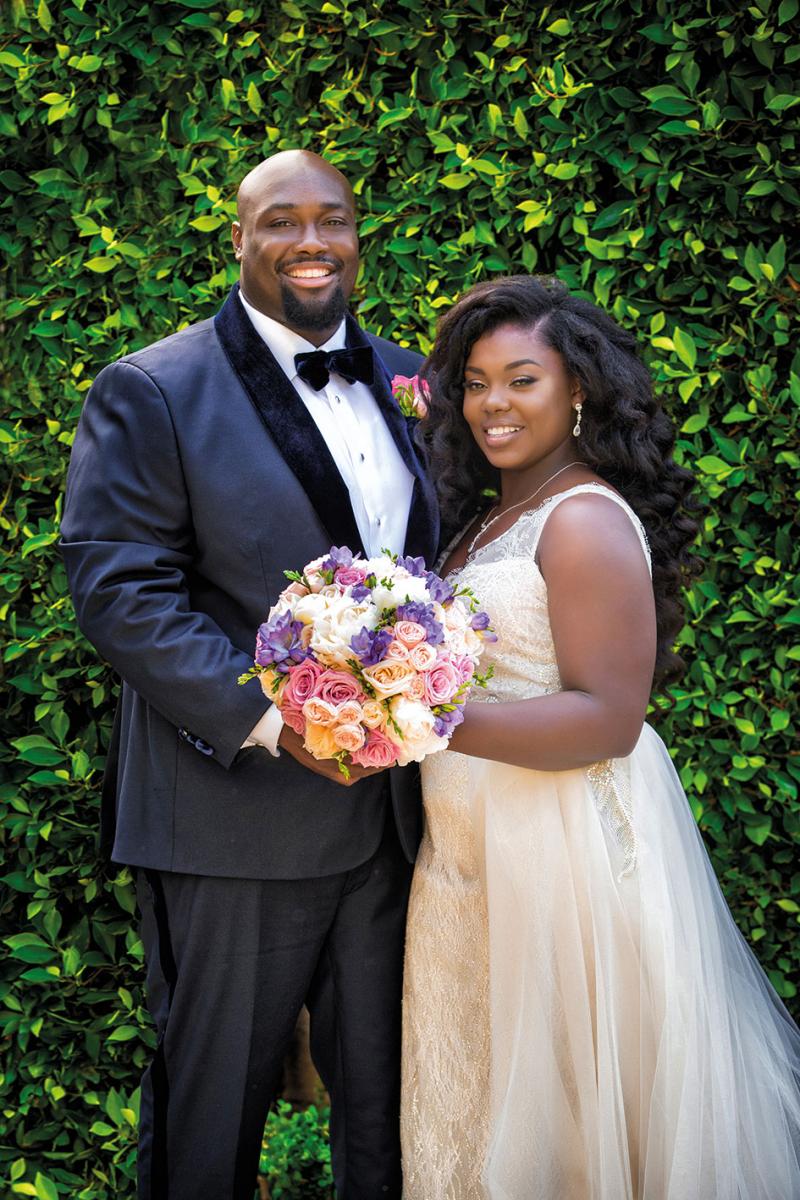 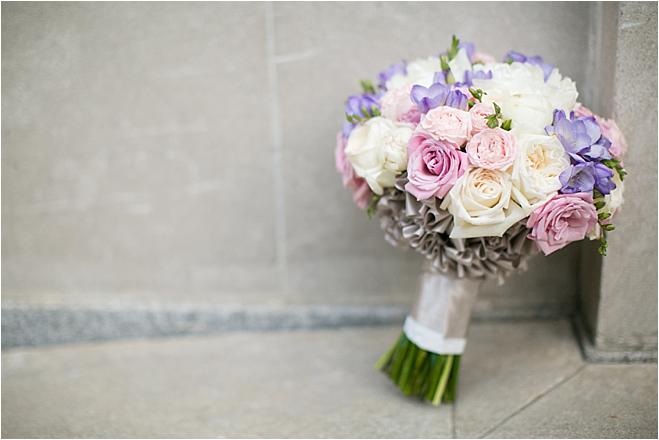 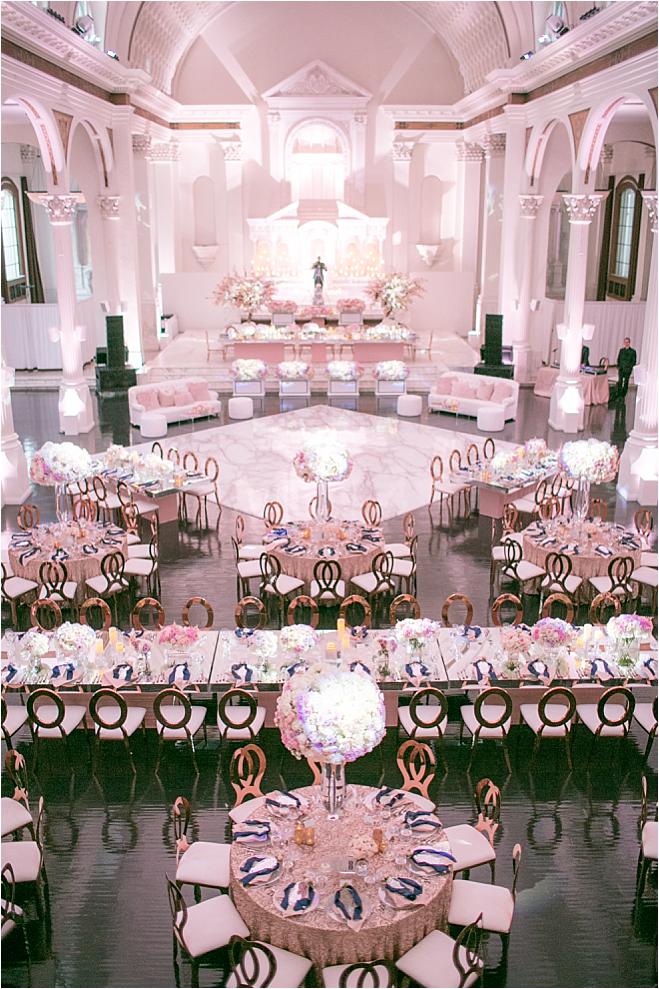 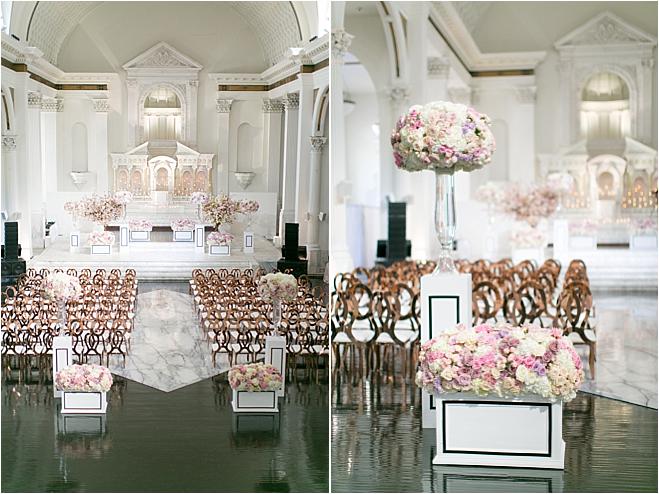 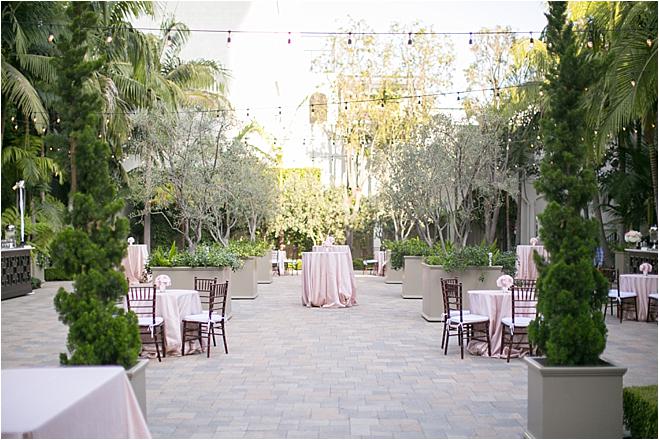 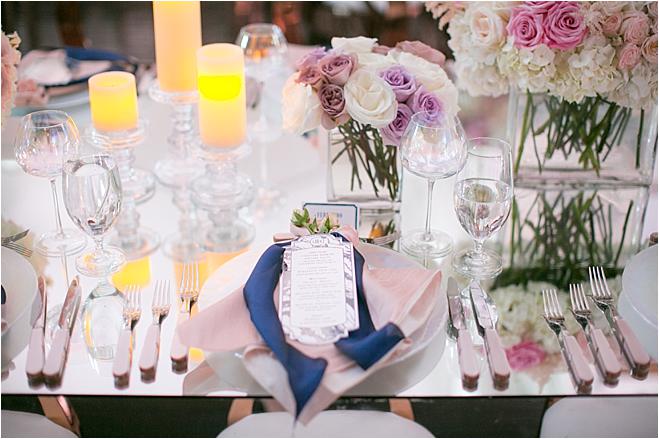 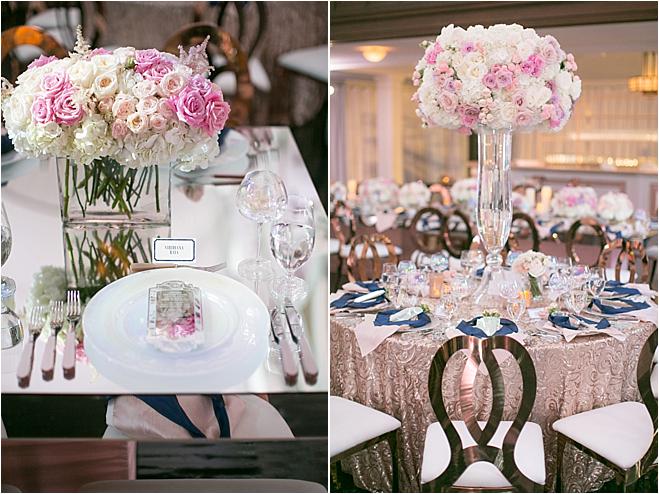 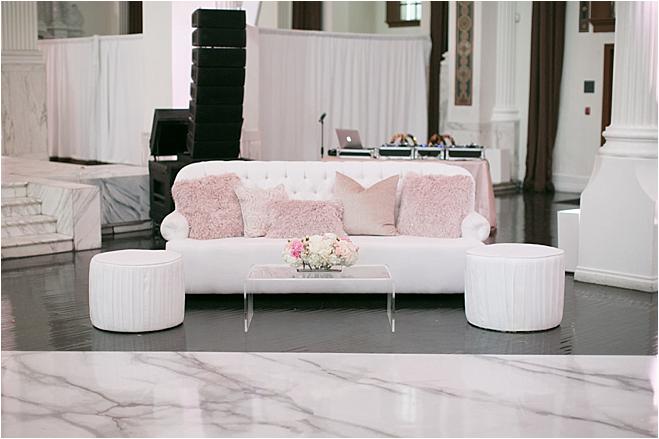 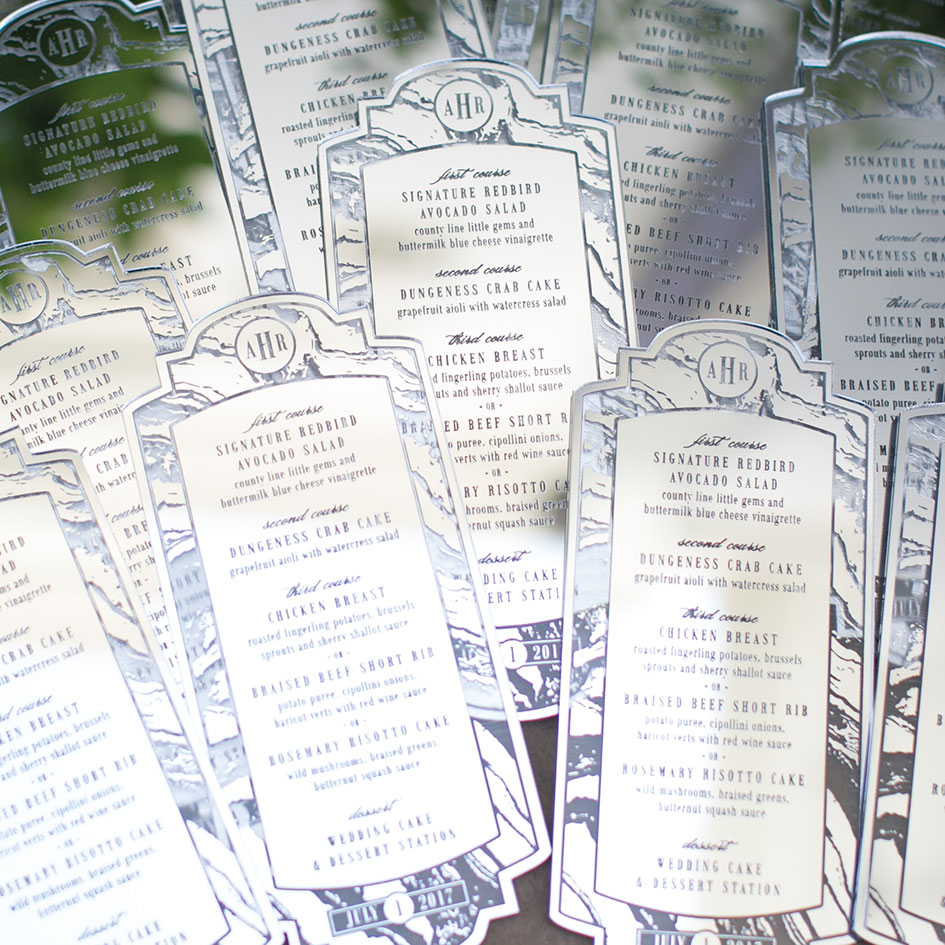 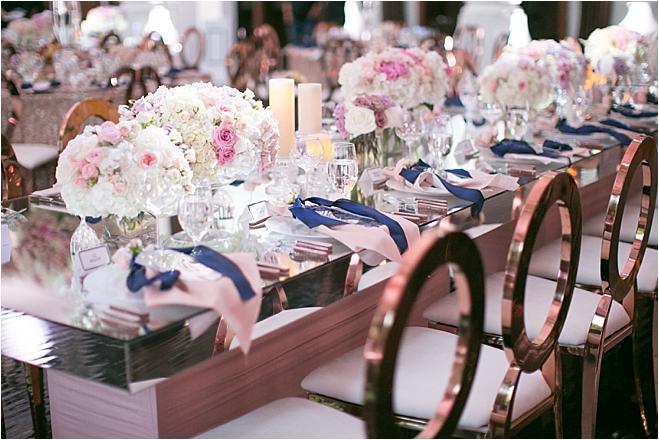 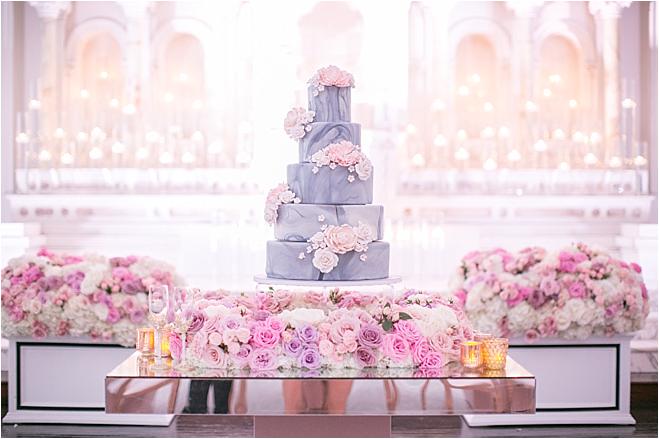